When flood waters receded, a large amount of plant and animal residue was left in the Bay Springs, MS area.  This deposit contained a high content of sulfur and many other trace minerals. As the waters ebbed a “iron-ore cap” was formed. This entombment preserved the microbial life so that it was not transformed by pressure through the coal stage. Over thousands of years, this "Marcasite Clay" maintained its purity until it was uncovered, carefully composted and exposed to air compelling the dormant spores to emerge as active microbes.

The history of the use of the marcasite clay begins, as far as we know, with the American Indians who lived in central Mississippi and realized its many benefits and healing powers. In this region, a vein of Marcasite Clay intersected the Earth's surface providing these Indians with minerals they used in mud baths for their many healing and cleansing ceremonies.

Throughout the 1920's in the south, there were serious outbreaks of hog cholera, a deadly intestinal disease. As some tell it, a group of hogs owned by one farmer escaped from their pen and ate some of this rich marcasite clay. Every one of the farmer's hogs died except the ones that ate the clay. The farmer remembered that in the back of his pasture there was an exposed strip of this dark gray clay surrounded by the reddish colored topsoil. He also actually observed the hogs eating the clay. With this event, the obvious question was raised, why did these hogs not die from the dreaded cholera while the rest did?"

Hearing the news, a group of scientists traveled to Mississippi from the Chicago area to conduct research and discovered that this clay possessed strong healing properties especially to the rumen wall. They attributed these remarkable protective and healing properties to the many trace elements found in marcasite clay. Minerals that were lacking in the soil. As a result and from this scientific research and subsequent conclusions, the start of a new company began in 1930 called, "TEX TOP."

Further experiments were made and in the early 1930's, the mineral deposit was mined, dried and then hydrated slowly resulting in a liquid which contained the miracle-working minerals. This liquid was the forerunner of our product, ''Liqua-Stim." During the 1950's and 1960's other products were developed from the marcasite clay that increased fertility in the soil and enhanced the health and vitality of animals. The Anvil Mineral Company produced and marketed a soil treatment which was the predecessor of today's "Flora-Stirn.'' They also produced a nutritional supplement for animals which was the predecessor of ''MRX." LiquaStim, Flora-Stirn and MRX are now products of Restora-Life Minerals, Inc.

This prompted Mr. Strite to produce the same product line himself and in doing so, he laid his financial resources on the line in 1980 and began the long hard road to making his dreams a reality. Mr. Strite and his sons produced and marketed these products directly to farmers under their new names to nearly every state in the U.S. as well as other countries including Malaysia.

As the years passed and Mr. Strite's health declined, he decided to sell the company but could find no suitable buyers. During this process, his business gradually slowed and eventually ground to a halt. For nearly three years, these fine products were not available to the many folks who once relied on them. Gradually there were more and more people who, unable to find their equal on the market, began inquiring about the possibility of producing them again.

Hearing these requests, Mr. Strite's oldest son, Larry, took up the call. He was fully aware of what these products could do to improve plant and animal health. He also sensed that the time was right to market these products as more and more people were becoming tired of conventional agricultural "wisdom" and were ready to try farming outside the "chemical loop". Larry took the idea to his brother Leroy and his brother­ in-law Eugene Witmer. After considerable discussion amongst them, they decided to approach Mr. Strite with the suggestion of leasing the complete operation from him. The details were agreed upon and the process continued through the summer of 2003 until by November 2003 a company was formed called, ''Restora-Life Minerals''. With financial backing, the plan was put into motion.

There was a tremendous amount of work to be done including the reintroduction of equipment that had been idle for three years which would again serve as the production 'backbone' of the new company. Printed materials for marketing and new sales aids needed to be prepared in order to make people aware of these natural alternatives to conventional agriculture. Additionally, an overall marketing program needed to be developed which focused on setting up a dealer and distributor network. Many miles were traveled and many telephone calls were made resulting in a list of dealers/distributors covering over a dozen states.

As we continue to grow, Restora-Life Minerals Inc., is committed to supporting its dealers in solving the problems of their clients. In that regard, we're dedicated to providing educational aids, increase their bottom line and to improve the health of their farms, their livestock, and their families as well as the consumers who purchase what they produce. The members of Restora-Life Minerals Inc., have built a sound and moral business foundation which can be built upon locally, nationally and internationally, for many years to come.

Restora-Life Minerals Inc., enthusiastically offers an alternative to conventional chemical growing and animal nutrition that is not only safer but that has been documented to be better. Our business is based on the belief that using healthy and natural products to grow our food yields healthy results and in today's world, we can all feel better about that for ourselves and for our children.

Why not become a part of our "not-yet-written" history and join the growing number of people who feel good about offering a better alternative to conventional chemical growing and animal nutrition? 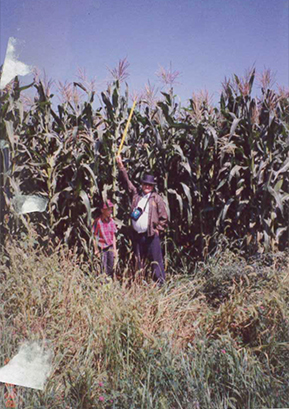 The secret to good health is in the soil, water, and air. In other words, the environment in which we live and work is of the utmost importance.